“I wanted to challenge the stereotypes surrounding the pursuit of sports that are ‘not so popular’”: Shanmugham P.

There’s a widespread belief that apart from cricket, others sports have no place in India. Several talented players from our country have withered away, with no support from both the government and society. Even with such challenging circumstances, Mr. Shanmugham P literally held his ground.

Against all odds: The rise of a hockey star

It was not an easy ride for Shanmugham P., who took on to hockey right from his childhood. The stereotypes that came with sports other than ‘cricket’ did not deter him. He pursued his passion with single-minded dedication, and his efforts slowly paid off.

He secured a position in his school team, then he made it to the state team, and eventually to the national team.

Even then he never had it easy. Pursuing BE from an evening college, he stayed focussed on his game. Eventually, politics in sports, and the limited reach of the game drove him to a point where he was about to quit.

That’s when an opportunity came his way and changed the direction of his life: the role of a Coach.

Creating opportunities where there are none: Coaching the young 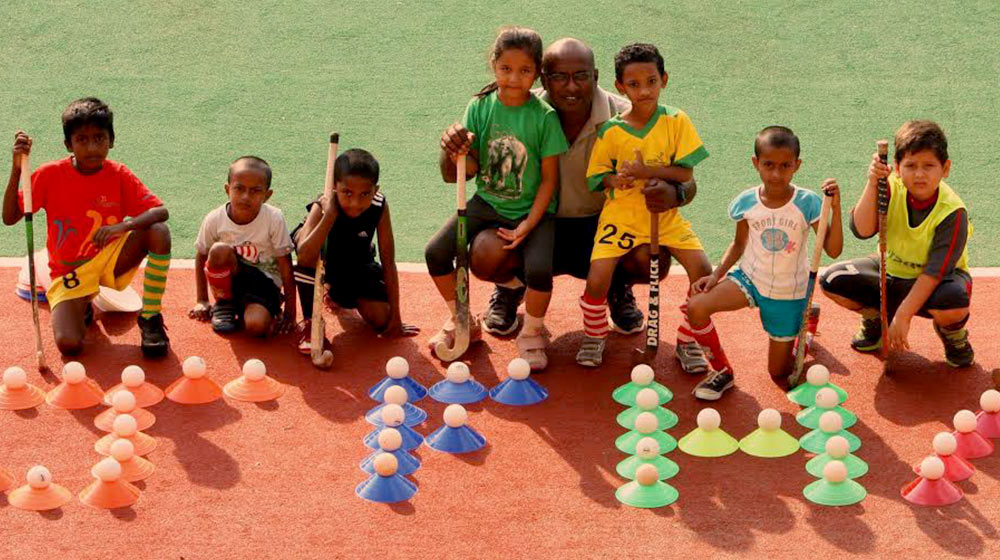 He started his journey as a coach with the NGO, ‘Dream a Dream’, which promotes sport as a medium to help children from vulnerable backgrounds. The success of the programme inspired him.

“Hockey as a game excited me much more than before. Their performance at school also improved, I was overjoyed to see how hockey was helping them,” recalls Shanmugham.

Having coached the state team, other professional leagues for over a decade and also the Qatar national team, Shanmugham embarked on a whole new venture when he learnt about the Jude Felix Hockey Academy (JFHA). JFHA was the brainchild of Jude Felix, an Arjuna Awardee, Olympian and former captain of the Indian hockey team.

Founded by a group of national and international hockey players, the academy used sports as a medium to help underprivileged children.

“We’re able to show that sports is a miracle healer. We are happy that we were able to give back to the game and the society,” he says.

With support and encouragement, talent can flourish

“The academy wishes to see many kids play the sport. Although they are not expected to stick to the game, the children do. Our professional sports persons and veterans motivate the community to be a part of the sporting programs.”

Sports in India: Rough road ahead?

“Future for sports in India will only be good if the Government, corporates and schools develop our grassroot structures. Or else, even with all the professional leagues coming up, we will fail to produce champions at the International level.

Sporting infrastructure for a common man or even a family should be accessible, for them to play a sport of their choice.

There is nothing wrong with cricket garnering attention. A lot of groundwork has gone in, complemented by the structures created to promote the sport. Hockey, and other sports need such impetus too,” he emphasises.

Lamenting the absence of sport facilities in government schools and the non-implementation of sports policies, he feels that a professional approach to all games can change their visibility and image.

If he can break the status quo, why can’t we?

“Our academy is an example for what citizens can do.”

Despite the standards set, JFHA is now faced with the challenge of retaining its volunteers, for not all volunteers are players.

“Our oldest volunteer is a 69-year-old woman. If she can come and volunteer, teach, learn and play hockey with the children, what’s stopping others?”

Often times, we bicker at the poor support and infrastructure for the athletes in our country, but only after poor performance at a major sporting event crushes the hopes of our athletes. Before we lose our country’s talent to this grim reality, let’s act; let’s address all that stops young talent from reaching their full potential.