The Impact of GST (Goods and Services Tax) in India 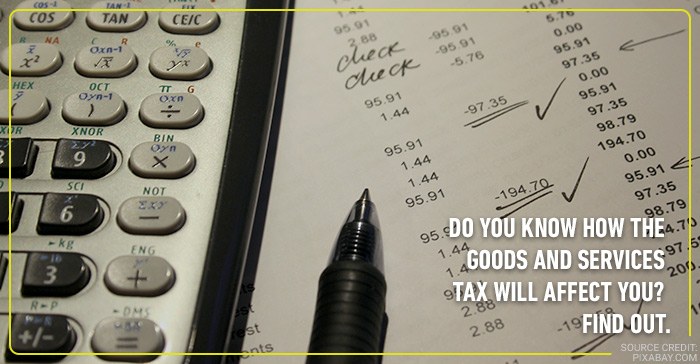 After a lot of deliberation, our GST council has finalised the rates for all the goods and major service categories under various tax slabs, and the GST is expected to fill the loopholes in the current system and boost the Indian economy. This is being done by unifying the indirect taxes for all states throughout India.

Footwear costing more than INR 500 will have a GST rate of 18% from an earlier rate of 14.41 rate but rates for the footwear below INR 500 has been reduced to 5%. So, you need to shell out more for buying a footwear above INR 500/-. And with respect to the ready-made garments, the rates have been reduced to 12% from an existing 18.16% which will make them cheaper.

Now, taking an Ola or an Uber will be cheaper because the tax rate has come down to 5% from an earlier 6% for a cab booking made online.

Under the GST, tax rate for economy class for flight tickets is set at 5% but the tax for business class tickets will have a higher tax rate of 12%.

There will not be much of an impact. The effective tax rate has increased from 4.5% to 5% in GST. But, passengers who travels for business trips can claim Input Tax Credit on their rail ticket which can help them to reduce expenses. People travelling by local trains or in the sleeper class will not be affected, but first-class & AC travellers will have to pay more.

Movies tickets costing below INR 100 will be charged a GST rate of 18% but prices above INR 100 will have a higher tax rate of 28%.

The Premium Amounts on policies will rise, with an immediate impact can be seen on your term and endowment policy premiums as the rates have been increased under GST across life, health and general insurance.

The gold investment will become slightly expensive because there will be 3% GST on gold & 5% on the making charges. The earlier tax rate on gold was around 2% in most of the states and the GST is increased from the existing rate to around 2% to 3%.

Education and Medical sectors have been kept outside the GST ambit and both the primary education & healthcare is exempt from GST. It means a consumer will not pay any tax for the money you spent on these services. But due to increase in the rate of taxes for certain goods & services as procured by these organisations, they may pass on the additional tax burden to the consumers.

Most of the cars in the Indian market will become slightly cheaper, except for the hybrid cars because the GST rate will be 28% tax on all the vehicles irrespective of their make, engine capacity or model. However, over and above this 28%, an additional cess will be levied which can be either 1%, 3% or 15 %, depending on the particular car segment.

People will have to pay more on mobile phone bills as GST on telecom services is now 18%, as opposed to the earlier tax rate of 15%. However, ​ telecom companies may absorb this 3% rise due to fierce competition.

Events like IPL i.e. sporting events will have a 28% GST rate which is higher than the earlier 20%.rates. This will increase the price of your tickets. And the GST rate for other events like theatre, circus or Indian classical music shows or a folk dance performance or a drama show will be at 18% GST rate, this is lesser than the earlier tax rate.

The money you pay towards your DTH (Direct-To-Home) connections or to your cable operator will reduce a bit as the rate is fixed at 18%, which is lower than the earlier taxes which were comprising of entertainment tax in the range of 10% to 30%, apart from the service tax of 15%.

The ticket price for amusement parks and theme parks will increase as the earlier service tax of 15% will become 28% under the GST.

Here’s is a list of some items which are completely exempt from the GST regime:

These are just a few ways in which the GST will impact daily life. How has your experience with GST been so far? Share your views with us on Facebook and Twitter pages, or email at jaagorein@gmail.com

More about the Experts: